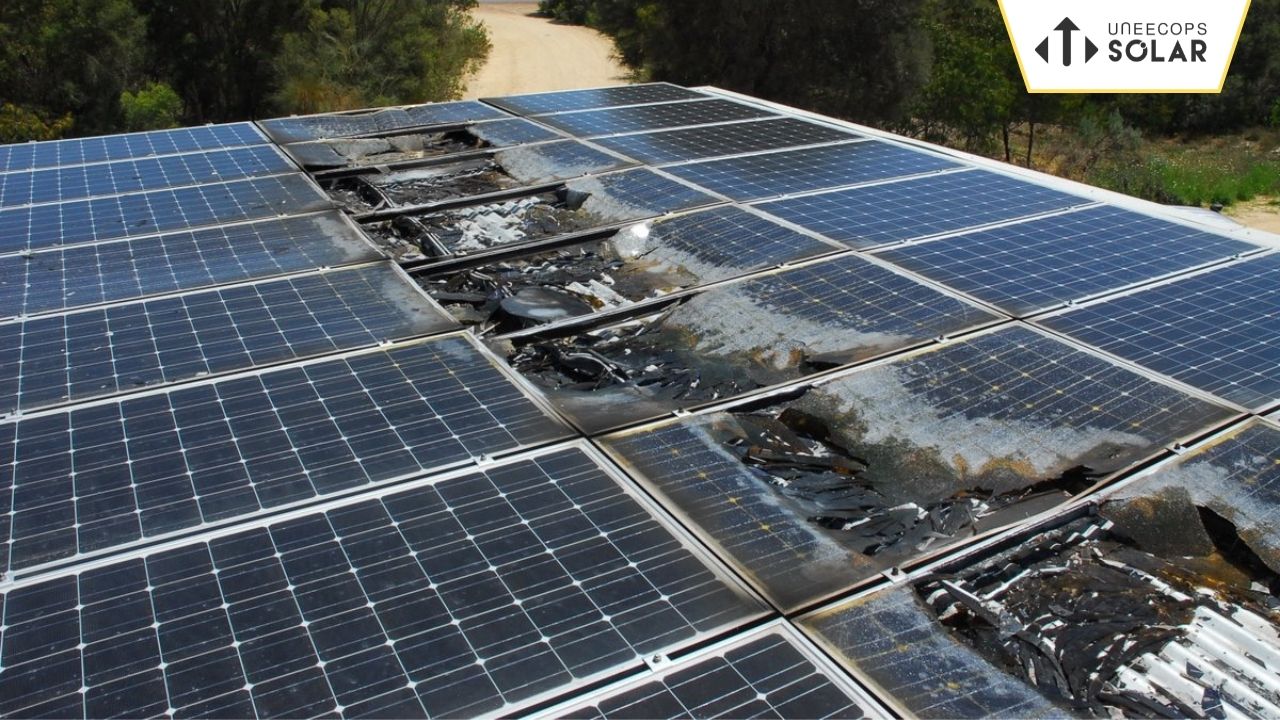 The Reality of Cheap “सस्ती” Solar Installation (With an important warning for 2022!)

Home » The Reality of Cheap “सस्ती” Solar Installation (With an important warning for 2022!)

A COSTLY MISTAKE YOU SHOULD AVOID

The solar power industry is in a price war at the moment. Due to everything that is happening in the world, we are seeing a number of solar installers dropping their prices to win business. You would think this would be a good thing, but it’s turning into an absolute disaster.

The Hidden Crisis behind cheap solar quotes on quality systems

The solar industry is currently plagued with loe-grade installers who are leaving behind customers with faulty systems that cost Lakhs to fix. We aren’t talking about a solar panel underperforming slightly, it’s way worse than that. We receive dozens of calls from people desperately looking for help to get their rooftop solar system fixed. Unfortunately, the money it costs to fix these installations is typically in Lakhs ( for commercial systems) it’s much more than the money saved by going with the cheapest quote.

The promise of a low-price, along with the benefits of free energy, can quickly make these solar systems irresistible. But a solar installation requires a team of skilled installers to spend all day on your roof installing a mounting kit, running high voltage cables and completing an electrical job. It’s also nice when they clean up after themselves. If a professional did not install your system, a lot of things can go wrong. Solar systems have an intricate nature. Many problems can be avoided when the installation is done right the first time.

You get what you pay for in this industry. Instead of saving, you could end up paying double (sometimes triple).

Even when installers use well-known brands for their inverters and solar panels, they might not use the same high quality in other materials. They will discount the price by thousands compared to the industry average, but they will then claw that money back by cutting corners. Of course, this will affect the lifespan of the system.

Examples of cost-cutting include hiring inexperienced employees that don’t have even the slightest clue about solar, for installing panels, which may include common labour from the Labour chowk, where you end up risking the safety of your panels. Not to mention that this installer will avoid any post-installation support. And good luck trying to get them back out to your house if they damage your roof!

Many consumers would look at the pricing first and then choose the most affordable. And this is the reason why we are regularly asked by manufacturers to help with service calls where the customer has tried to manage the issue with their initial installer who is not answering their calls or simply is out of business.

The ‘cheap solar’ disaster: 3 in 4 solar systems are faulty

Back in 2016 solar was booming and every tom dick and harry wanted a part of the pie. So they came in gave cheap quotes without realizing that the system needs to have a life of 25 years . most of these companies are no where to be found now. There are thousands of horror stories posted online, and we get dozens of calls a week from people trying to get their systems back online after people give up on trying to get help from their original installer.

Everyone understands the basic reasons why the price of televisions varies so much, and yet when it comes to solar power so many of us go hunting for the cheapest quote we can find. Every day I hear people saying, “yes, you have good reviews, your system sounds great (etc.), but I have a quote here for the same system that is Rs. 30,000 cheaper…”

IT’S NOT THE SAME SYSTEM!!!

If a 60″ television from Sony with the latest technology costs Rs. 3 Lakh, and another 60″ from a no-name brand costs Rs. 60,000, few people would claim it’s the same television just because they are the same size. Of course, the whole problem of choosing a solar power system is that solar is a completely new industry. Solar it is the sum of all the elements: equipment, workmanship, engineering and the quality of the installation.

The fact is that the equipment cost is moe or less the same for all installers, as the distribution companies are limited and the same for everyone. Uneecops Solar builds large commercial solar installations in India, some of which are at utility scale with thousands of panels being installed. Every year we buy hundreds of containers of solar panels, some of them directly from the manufacturer. Then, how is that possible that we still see some installers offering under market prices? The answer is simple: Many corners are going to be cut.

Throughout our company’s existence we have come across customers, who once were considering installing their system with us, calling years or months later to help fix their system as the installer from whom they received “the cheap quote” is no longer in business or has refused to correct the issue for months.

The sad reality of this industry is that most installers will avoid working on systems they didn’t install. And the ones who are willing to do so will charge a premium for the work which will wipe away any savings that might have happened by choosing the cheaper system.

What you Should know about Solar Equipment

A quality solar power system is designed to last 25 to 30  years and beyond. And now premium solar panels come with a 25-year product warranty to back that up. When installed to the highest standards, little to no servicing is required.

The brain of the system is the inverter or micro-inverters. The inverter converts DC to AC and is the working part of the system. In the unlikely event that your solar system needs to be serviced, time is money because your system is turned off until it is fixed

Other components of the installation, like the DC isolators which most people know nothing about. And yet cheap DC isolators can cause all types of problems, including fires. If you buy the cheapest solar system you can find, there is a higher chance that the installer will cut corners on the quality of electrical components. Quality DC isolators are around 5 times more expensive than the cheap ones, and this is why we only use the best models available.

At Uneecops Solar, we only offer premium electrical components, premium solar panels with a 25-year product warranty and high quality-inverters. They have ‘best in class’ efficiency ratings, close to perfect reliability and lightning-fast service when needed. It’s incredible how much of a difference it makes when the manufacturer’s service department answers the phone after a couple of rings, processes a claim and ships a replacement immediately.

If all you are looking for is a bargain, there are two main issues that we see constantly. Either the output isn’t what it should be, or the components simply break and need to be replaced. It’s rare for a cheap system to show any signs of trouble in the first year or two (by which time you have left a glowing review of how great your system is), but it is at around the 4 year mark (just when you start to get your money back) that things start to go wrong. But unlike a television – you can’t just throw out a solar system and buy a new one.

Now we get into the murky side of the solar industry where companies rely on the brand names of the products they are installing, only to strip quality out of the installation service to cut costs and use tricks and confusion to convince customers to buy.

At the end of the day, any installer can quote good brands. It’s what happens after you sign the contract that really matters. A 2021 report highlighted the biggest issues in the solar industry were: disappointing output, poor system design and an inverter that needed to be replaced 3 times!

An example creating confusion is about the warranties of the system. They will reference the 25-year performance warranty of the solar panels, making you believe that this is the energy the manufacturer guarantees which is far from the truth. They will also avoid discussing the 5-12-year guarantee of the inverter  which will need to be replaced during the lifetime of the system. Neither the product warranty of the panels themselves (non premium panels offer from 10-12 year product warranty).

The majority of companies’ sales representatives are often on a commission-only pay structure which forces them to do whatever is necessary to get you to sign on the dotted line.

The good news is it has never been easier to find a reputable installer. Just by asking a few questions you can zero in on the right installer for you

Be careful – solar sharks are everywhere, and they are ready to prey on uninformed customers.

The Cheapest Quote is never the Best Value

We recommend choosing quality products. Install your system through a company with a stellar reputation that offers full warranty support, service, system monitoring and a fair (rather than a cheap) price.

We have built Uneecops Solar  on these principles, and these have been our core values for the past 15 years as uneecops group.

We believe there is a need for a company that delivered quality, reliability and honesty in all aspects of its dealings with customers, suppliers and staff.

We looked around the industry and found there were many instances where customers had been made unrealistic promises, overpaid for or been supplied with cheap products or services and often left without after-sale customer service.

It was, therefore, one of our main objectives in founding Uneecops Solar to set a standard for the industry to follow – a standard where customers know they are receiving the right advice for their own situation, that they will receive what was promised, and in the event of a problem, that the company and its team will deal with it to the best of their ability.

This means we do not sell ‘cheap solar’. If you search for cheap solar you will not find a listing for Uneecops Solar simply because we are not able to provide a quality solar system for the prices seen at the bottom end of the market.

So if you want a 100 kW system in 2022 for under 44 Lakh, you will find one. But after reading this article I hope you will come to see that the lower price of the system might not be worth the risk involved. Don’t join the dozens of calls we get every week asking for help on a system that is around 4 to 5 years old and doesn’t work anymore.

Uneecops Solar  is a Trusted rooftop Solar Company in India

If you are thinking about SOLAR or just want to explore Solar as an option for your business
Let’s have a chat. 𝗰𝗼𝗻𝗻𝗲𝗰𝘁 𝘄𝗶𝘁𝗵 𝗼𝘂𝗿 𝘀𝗼𝗹𝗮𝗿 𝗲𝘅𝗽𝗲𝗿𝘁 and we will do our best to answer your questions and clear your doubts about solar for your business.